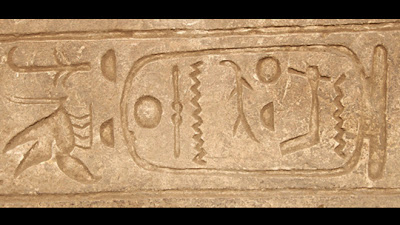 Discovery News reports of a new find in Egypt.

A new king has been added to the long list of ancient pharaohs, the Egyptian Minister of State for Antiquities, Mohamed Ibrahim, announced this week.
The king's name, Senakht-en-Re, emerged from the engraved remains of a limestone door found by a French-Egyptian team  in the Temple of Karnak complex on Luxor’s east bank.
This is another example of how the more we think we know of the world around us, the less we do actually know. This archeological find was hidden in semi-plain view in the temple center of ancient Egypt for thousands of years. The the Divine succession traditions of most Kings, their predecessors were wiped out of existence and official memory so the new King could be considered the sole Man-God.
Mentioned in only three documents written one or two centuries after his reign, ‬Senakht-en-Re is regarded as one of the most obscure kings of the 17th dynasty.
No objects or monuments had ever been found bearing his name, and his tomb has yet to be discovered.
"We knew nothing  of this pharaoh - until now. These remains are the first contemporary document of this king ever discovered in Egypt," the CNRS said.
According to the hieroglyphics, Senakht-en-Re had the monumental gateway built from limestone blocks transported from Tora (the modern Helwan, south of Cairo). At that time, the town was under the rule of the Hyksos. Known as the "rulers of foreign countries" (probably of Asiatic roots), they infiltrated Egypt and came to dominate the Nile valley for over a century during the Second Intermediate Period (1664-1569 B.C.).
They were expelled from Egypt by Kamose, the last king of the 17th dynasty and his brother Amhose, the first king of the 18th dynasty.
In the LOST series, there was an intense interwoven story arcs directly pinning the Island and Egyptian mythology. The Temple served as a focal point between the battle between Jacob and his brother, MIB. Likewise, there were other forgotten relics found across the island, like the Black Rock and abandoned Dharma stations. Those abandoned structures serve as time post in the Island's succession plan from leader to leader. And like the archeologists in Egypt finding a new king, the LOST writers never connected the dots of the differing cultural mysteries of the Island's former inhabitants to the present.
The archaeologists, led by French Egyptologist Christophe Thiers, of the Centre National de la Recherche Scientifique (CNRS), unearthed a fragmented lintel and an imposing door jamb during routine excavation at the temple of Ptah.
Ptah was the ancient god of Memphis; the creator of the universe and the god of artisans. He was considered one of the chief deities in ancient Egypt. A cult of priests would have served his memory on Earth at his Temple.
The new hieroglyph is part of a temple complex. It appears to belong to an administrative structure dating to the enigmatic 17th Dynasty (about 1634-1543 BC). The limestone remains featured hieroglyphics which indicated that the door was dedicated to Amun-Re.
Amun was the supreme god of the ancient Egyptians. He is associated as the Sun God, the giver of light and life.
"They also revealed who ordered the construction of this structure. It was the pharaoh Senakht-en-Re," said a CNRS statement.
So just as the Crazy Woman taught Jacob about the Light Cave, ancient pharaohs created structures to worship (in order to keep the checks and balances between the world and universe in balance) Amun-Re and the other gods.
One of the great failings of the LOST series was the intentional omission in the final story arc of how the show's creators could tie together these intense and prominent Egyptian elements into the reasonable explanation for The End conclusion.
Posted by welh at 9:54 AM

The NY Post article discusses the bizarre ending to the HBO megahit show, The Sopranos.


James Gandolfini, the actor who played crime boss Tony Soprano, admitted that he was as confused as everyone else by the finale as set forth in  April’s Vanity Fair.

The ending of the show was set with Tony and his family having dinner, then there is a hint of something about to happen - - - but the screen suddenly goes black. No explanation. No noise. Nothing.


“When I first saw the ending, I said, ‘What the f--k?’” Gandolfini said. “I mean, after all I went through, all this death, and then it’s over like that?”

Many Sopranos fans thought that the black-out ending was a cop-out, a trick or a bad joke on them. When fans invest a lot of time in their favorite shows and characters, then want some resolution.


Gandolfini says he eventually, over time,  came to like  the ending.

"God knows we’ve talked about that ending for five years now — we’re still talking about it. People stop me in the street. ‘Did you get the ending? Did I miss something?’ I thought it was very, very shrewd,” he says.

Shrewd may not clear up the bitterness in some fans minds.

LOST had a different kind of ending, but just as confusing. The idea that the sideways world was a purgatory and the characters were all dead when the producers said for years the show was not about the afterlife stung many die hard fan theorists. They thought they were mislead. All the tangents about science, worm holes, time leaps . . . . were all somehow turned irrelevant filler since they did not play into any resolution in The End.

Now, some fans liked the ending because it brought their favorite characters back together. It was the happy ending many wanted since the pilot episode crash. But it seemed to be the easy way out of a corner painted by the unexplained mysteries and events of the Island.

You could have ended LOST a season before, with Juliet pounding a rock to get Jughead to explode. That would have been "The Sopranos" style ending - - - and fans could still be rationally debating what happened to the characters and the Island if the bomb did or did not explode.  Because, the final season with the Jacob and MIB story arc really did not connect with the prior seasons plot lines, character motivations or continuity, there lies the disappointment for many fans.
Posted by welh at 8:33 AM