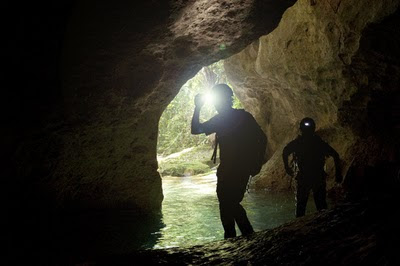 When cable diving last week, I came across a "double take" image on the History Channel. The illuminated green water at a cave entrance sure looked like the Light Source cave in Lost. The narrators were describing a global network of six ancient openings or gates that old civilizations believed were passageways into the underworld or Hell. The cave image above is from a Mayan location in Belize. Once the investigative team entered the cave, they found it a dangerous place, littered with human bones. They said the Mayans used this place to go to the underworld, and to make human sacrifices to their gods. By appeasing their gods, they could sustain life on the surface world. The Light Source cave was also littered with human skulls and bones.

The concept of gates to a different dimension were part of the Lost mythology. The FDW room had hieroglyphs that made mention of Earth gates. The countdown timer in the Swan could have been used to maintain closure of a gate (a place of death). And the Light Source cave contained a hieroglyphed plug that when removed, caused the light to vanish and the island quake. That mechanism caused the "immortal" Flocke to turn into mortal form (from death, to life, to death).
Posted by welh at 1:28 PM

"Even when we were writing the script, the most important issue was how much of the puzzle we should solve and how much we should leave as mystery."
–Satoshi Kon, the late, great Japanese animation writer-director

Recent Hollywood reports indicate that television and film producers are gravitating toward the Lost script model of many mysteries unsolved or unresolved for the sake of character development. Script writing and story telling is quite different than a Jason Pollock painting. But that is the tenor of the creative community: the ending is not as important as the journey. This does not sound like a promising trend.

It is one thing to hide clues within the story (including the background). But it is another thing to show facts and circumstances as clues when in fact they have no bearing on the ending. Finishing a 1000 piece puzzle with 5 pieces missing may be no big deal since the big picture can be seen, but finishing the same puzzle with 500 missing pieces is wrong.

Another Hollywood staple is the re-make. Take an old classic show or film, and recast it with new actors and writers. In the vast majority of cases, the remake of a show is a pale comparison to the original show.

A side note to the Lost model is a report that Hollywood was in the midst of trial ballooning a remake of Gilligan's Island, but with a modern, "Lost" sexy twist to the characters. They described the updated characters "ala Lost." The only thing the shows have in common is that passengers are lost on an unchartered Pacific Island.

You had the bumbling first mate, Gilligan; the overweight dim witted captain; the uber rich couple; the snotty tall fashion model; the naive farm girl; and the professor who could make a coconut radio but not a life raft. There was nothing controversial; it was plain vanilla television comedy.

If you apply the Lost characters to the Gilligan remake, here is possibly what you would get, based upon their Lost resumes:

Somehow, that cross-characterization into the Gilligan world does not seem too interesting, especially if it is still supposed to be a comedy.
Posted by welh at 8:52 AM