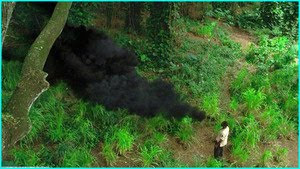 There was nothing more mysterious than The Smoke Monster. In the fan site communities, the question was "What is It?" It had strange, complex elements that seemed contrary. It was smoke in form, but appeared with a real loud mechanical noise. At times, it appeared to be curious, i.e. when literally scanning a person in the jungle (like Juliet). So it must have been made up in part with some electric element. Speculation ranged from it being the representation of the strange electromagnetic energy being trapped by the Hatch to a nanobat experiment gone wild.

At other times, it appeared to be manic, primitive angry killing monster when it killed the French science team or Eko. It lead to a wide range of speculation of whether the Monster was a machine or an intelligent being or whether it was some transformed homicidal beast. Or a representation of the Devil as Evil Incarnate as the temple people called it.

Since its appearance in Season 1, Smokey was the metaphor for the series. It was the abstract representation of Charlie's ultimate question of not where the survivors were . . . but What is the Island?

The island was not an earth bound geophysic rock that emerged from volcanic activity to appear above the level of the Pacific Ocean. It moved. It vanished. It was "hard to find." It was unworldly.

Smokey was alleged to be the Island Guardian, a security system to take down outsiders who came to its shores to steal, corrupt or control the island's special properties or powers. But who controlled the guardian? When Ben opened his secret closet and released water down the small shaft, he "summoned" a violent smoke monster to attack the freighter soldiers. It was said at the time that water and electricity don't mix, so maybe that is why Smokey appeared in an uncontrollable, violent state, so much so that Ben yelled at everyone to flee the barracks. But at other times, Smokey appeared to act on its own, living in the underground temple walls, coming out of the cracks to attack or terrorize visitors.

It would have been interesting to have Smokey been explained as a hybrid, steampunk type ancient intelligence that was triggered by the release of water into a DaVincian machine to create-release the smoke monster.

But the island storyline collapsed in twists, turns and so many dead ends that the nature of the smoke monster was muted and whitewashed over. The smoke monster turned into the shape shifting Man in Black character, the devil, the dead soul of Jacob's brother, the darkness to the island's light life force. Overt symbolism glazed over what fans really wanted to know - - - what was the smoke monster, what was it made of, how was it created, how did it operate and how did it think.

It is now a noticeable trend in Hollywood series that in the beginning, writers put together key story elements that lure, entice and captivate the audience. But some time in the middle of its run, the show changes gears - - - leaving initial fans flummoxed, confused and at times dissolute or angry. It is like basing an entire show around two incapable characters then at the end switch to them getting married and living happily ever after - - - with no memory of the past conflicts.

LOST may have been the show with the most grinding script gear shifts of all time. And the symbol for the forced story shifts is the smoke monster entity.