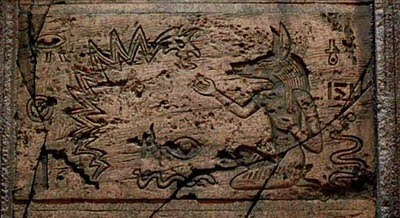 Another site recently pointed out an interesting (continuity) question: Why did the Egyptian hieroglyphics (in Dead is Dead) depict the smoke monster seemingly hundreds of years before we saw it created?

Anubis first appears in the Old Kingdom texts (2886 BC-2181 BC). The Roman Kingdom to Roman Empire spanned from 700 BC to 1453. Many believe that the shipwrecked Claudia, the Roman mother of Jacob and MIB, was probably from the Roman Empire period of 70 BC to 30 BC (which corresponds to the last Pharaoh of Egypt, Cleopatra.)

The real question is then: Why did the Egyptian hieroglyphics (in Dead is Dead) depict the smoke monster seemingly THOUSANDS of years before we saw it created?

In the Season 6 mythology, we were told that the Smoke Monster was created when in Jacob's rage, he threw the dead or dying brother into the light source (against his mother's teaching) and the Smoke Monster emerged from the Source.

However, it is possible that the Smoke Monster had existed before but it was "bottled up" at the source until another human soul came by for it to attach to and leave its underworld prison. The blast door showed the island "security system" as Cerberus, Hell's three headed vicious guard dog. If you believe that the island is a forehell in the afterlife, the concept of pure evil incarnate as the Smoke Monster can be a timeless beast that may have challenged all the island souls since creation, including the ancient Egyptians thousands of years before Jacob and MIB.

It would make sense that an Egyptian underworld god like Anubis would have to deal with an evil entity like the Smoke Monster. For if the Smoke Monster was not Jacob's brother, but an evil spirit that assumed MIB's personality and memories (and added to its own like how to make a FDW), the material was present in the story to make a rich tapestry of character development. But TPTB missed an opportunity to tie together all the diverse plot elements into a final cohesive ending.
Posted by welh at 8:54 AM 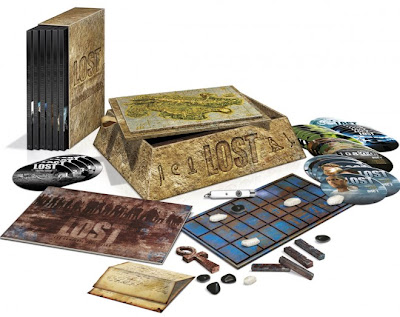 The collection also features a black stone/white stone Senet game, a replica model of the island; an Ankh bracelet similar to the one worn by Dharma Initiative member Paul and carried by the Tawaret statue, a black-light pen; assorted keepsakes; plus 30 hours of previously released extras and a disc of new bonus material.

The 12 minute epilogue sole purpose has to be to sell Season 6 discs. As a previous rant concluded, if TPTB wanted to answers the mysteries, they should have done so in the finale.

Now, the collection "features" are just as off-base. The whole mystery of the Egyptian culture, temple, religion as symbolized in the Senet game and Ankh bracelets was a non-factor in the climax of the story, and totally brushed a side as any foundational material for the ending. It does sort of back slaps die hard fan researchers who tried to find meaning in the forgotten LOST story lines and touted island features now being put into a box like a cheap, miscellaneous Kracker Jack toy. It just adds to the confusion of what LOST was really about. If the Senet game, Egyptian gods and symbols were so important now, why were they not adequately explained within the show itself?

As the Post stated last weekend's "Lost" auction, props, scripts and clothing from the show went on the block, bringing in a surprising batch of bids. For example $47, 500 was dropped on the Dharma van Hurley saved the day with in the season three finale. A stripped down, rusty clunker from the late 1960s goes for a price of a loaded SUV? That's more than a Barrett-Jackson car auction value. What show value did the van provide? It was first the tangible hope of Hurley to rekindle his broken spirit like fixing cars with his father. It was then the instrument of change from pacifist Hurley turning into killer when he mowed down the armed Others on the beach. Turning point for the series? No, because none of that mattered in the end.

How about a staggering $27, 500 for the Lighthouse Wheel? At least the winning bidder will not have to squint on HD TV photo captures to determine who was really on the wheel and what were the real numbers. But what would anyone use it for? A large dining room table (some assembly required)? Your own fortune telling reading kiosk on the carnival broadway? An SBA loan would be a cheaper alternative. Was the Lighthouse wheel any more important than the Dharma van in the final plot of the story? No.

The Frozen Donkey Wheel that triggered the island to time trip went for $25, 000. This was once one of the great mysteries of the story: how did it work, what was the science behind it, and who made it? We learned in the rushed MIB back story that MIB and his Roman friends created it, how it works, no one knows, and its relevancy to time skips was left unanswered. The FDW could have been the centerpiece of the island explanation, but it was only another plot dead end.

Likewise, the Swan station Hatch Door & Computer went for $16,000 each. The Hatch Door was one of the greatest, time consuming off show research clue machine for die hard fans. Translations, time lines, an early island map - - - all clues to unravel the darkness. The computer that needed attention every 108 minutes or "god help us." Even Faraday's clue rich in science theory Journal with Jughead Details and "Des is my Constant" went for $27,500.

But, the importance of those items we, as fans, placed on them were totally irrelevant to the writers when the story of the island was wrapped up.

Jacob/MiB's black & white rock scale sold for $8,500. Most viewed the whole black and white stone thing as symbolic for good and evil. But in the story conclusion, there were no moral standard for good or evil. So the prop itself symbolizes merely the gray conclusion of the show.

Locke's compass went for $8,000. This is one of the enigma props. It time traveled separate from Locke, as a means of showing Richard the truth. But what truth? That Locke had to become the leader of the Others; but that was not the real John Locke.

Jack's passport sold for $4,750. Now, we all know identity theft can be costly, but Jack Shepard did not appear to be too wealthy for an alleged miracle working neurosurgeon.

Claire's squirrel baby, one of the most disturbing and bizarre props, sold for $2,750! Now, the writers gave the whole Claire alone in the jungle three years after being blown up by Keamy's crew no coverage. It was one of those sink holes in the overall story line of the show. Was Claire dead? Why did she leave Aaron? Then why did she blame others for her own choices? Was she a Flocke zombie? When did she create the squirrel baby? Was she insane? The most disturbing thing about this is what will the winning bidder do with it!! I don't think too many people have jungle manger scenes for the holidays.

A "portion" of the cave ceiling with candidates names went for $650. I don't know what the ceiling was made of (paper mache or plaster), but what would you use name and numbers for, new postal box name tag?

Finally, the Pilot Script signed by JJ Abrams and Damon Lindelof sold for $15,000. Well, there was a third guy who created the original pilot script. But if you wanted a copy of the series first show, you could print out a copy of the transcript from lostpedia for a lot less money.

The auction tells us a few things. One, LOST fans are still rabid enough to bid way too much money for show trinkets. Two, ABC and the studio were quick to destroy all remains of the show as quickly as possible; no re-boot, prequel or sequel in the works.

"It’s been a little more than two months since Lost aired its final episode, fittingly entitled The End. Much has been said and written about how the soulful sci-fi drama wrapped things up — or didn’t, depending on your perspective. There were those who loved it, there those who hated it, and there were those who to this day still don’t quite know what to think." - - - Doc Jensen, EW, 8-10-10.

The conundrum. The confusing or difficult question or problem which remains unanswered to any global satisfaction.

Conundrum was first recorded in 16th century literature by Thomas Nashe, who used it as a term of abuse for a crank. It was then later used to denote whim or fancy.

Many lost blogs have closed shop, and many fans have moved on in silence. However, the community still seems to be simmering in a mental crock pot. Maybe they are waiting for the final box set for the final answers. But let's be real: TPTB concluded their series without any final answers.

As Lost's biggest proponent just said, in describing the show:

soulful - - - which denotes spirituality in life and death, even though TPTB claimed the show was not about purgatory or the afterlife, but ended the show there anyway;

sci-fi - - - science fiction is taking known facts and transforming them into realistic future applications, but without some explanation of the mysteries it is not science fiction but red herring diversion;

drama - - - the tension between human beings that results in conflict that is resolved in the end, which is still open to heated debate depending on one's own perspective.

There are fans who to this day still don’t quite know what to think about the show, and as Time lingers on, less and less people will actually Think about it.

There are reports that the special feature in the Lost DVD box was leaked on the net for a few hours. According to a few viewers, the epilogue promises to answer some, but not all, of those lingering questions that the fan base had once the series finale aired back in May.

This will bug some people. TPTB begged for an additional 20 minutes for the finale. They needed it to wrap up the story. Now, there is additional story to answer some "lingering" questions, that were raised in finale?!! If you could not tell your story in the allotted SIX seasons, it adds a measure of insult to the aggravation of disappointed viewers that it will cost them money to buy a DVD that may, or may not, help with the series resolution. That could be considered by some as a form of abuse.
Posted by welh at 11:12 AM

Another biblical name, for a Hebrew prophet and ruler. In the story, that would make Jacob and Samuel brothers. The oddity is that no one, not even his family members, ever called MIB by his alleged real name.

Man in Black was an attempt to add more mystery to the spirited Smoke Monster. It may go down in LOST lore as another convoluted back story question that will never be truly answered.
Posted by welh at 5:00 PM